Activities are displayed as rounded rectangles.

Creates a new record of any entity type.

Creates a new record related to the target record.

Updates the target record. You can utilize formula here.

It's possible to delete the record with the formula expression: deleted = 1.

Updates the record (or multiple records) related to the target record. You can utilize formula here.

Updates a record that was created within the current process.

It's possible to delete the record with the formula expression: deleted = 1.

Updates the process record. Can be used to assign the process to a specific user or team.

It's possible to delete the process record with the formula expression: deleted = 1.

Relates the target record with another record.

Unrelates the target record from another specified record.

Assigns the record to some user by a specific rule. Can be applied to the target record, the process record or any record created by the process. See more.

Process variables can be used in a message with the placeholder {$$variable} (as of v2.5.8).

Makes specific users to follow the target record, the process record or any record created by the process.

Runs a workflow rule of the sequential type, target record can be switched a related or a record created by the process.

When using formula in a task that creates or updates another record, the current entity (for the script) is switched the the record you are creating. To access attributes of the target record you can utilize the function targetEntity\attribute(ATTRIBUTE).

In the context of update record actions it's recommended to use formula only for setting attributes. Use Script Task for any other logic.

Sends an email message to a specific recipient.

An email can be sent to:

You can specify which email address the email will sent from.

If you specify a Reply-to address, a sent email will contain it in a Reply-to header. It will facilitate a recipient to reply to that address instead of the address specified in the From field.

It's possible to use process variables to specify email address (recipient or sender) with Specific email address option, e.g. {$$emailAddress}, where emailAddress is a variable defined in the process before. Available since version 2.4.5.

Email Template is used to generate the email. You can use regular placeholders (both in body and subject) to substitue field values of the target record. You can also use process variables (defined in Script Task) in the template with placeholders like {$$variableName} (since advanced pack 2.4).

You can catch a reply on the sent email with Message Intermediate Event further in the process.

It's possible to add opt-out link to an email body. Opting out can be caught within a process with Catching Signal Event with the signal name optOut.ENTITY_TYPE.{$id}, where ENTITY_TYPE should be replaced with entity type (e.g. Lead), {$id} is a placeholder standing for the target record ID. Signal name usage example: optOut.Lead.{$id}.

It stops the flow until a user (specified explicitly or selected by an assignment rule) resolves the task. Process User Task record will be created in the system. By default there are three action types: Approve, Review, Accomplish.

It's possible to specify text with instructions for the user (markdown is supported).

You can use placeholders in Name and Instructions fields:

It's possible to display process task on the target entity detail view.

You can utilize Report Panels feature to display process tasks on the record detail view. Create a list report that shows all user tasks (no filters). Then create a report panel (from administration) for needed entity type with this list report selected.

Created User Task can be canceled by a process. There are two ways: 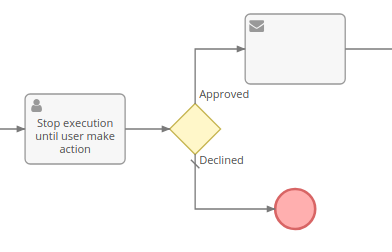 Executes the script in espo-formula language.

You can store some variables and use them further within the process. All set variables ($variableName) will be automatically stored.

Variables can be utilized in:

You can update the target record with Script Task, though the more proper way is to use Update Target Record action of the regular Task.

In Script Task you can define actions that are impossible to do with the regular Task. Examples:

Note: It's recommended to clear temporary variables, that won't be needed further in the process, in the end of the script.

An isolated process that executes within the current process. The sub-process has it's own flowchart. It starts once the flow reaches its activity element.

Sub-process should have one (and only one) regular Start Event.

Sub-process can be interrupted by an interrupting boundary event. When the sub-process is successfully ended (not interrupted, not ended with an error), the flow of the parent process proceeds to the next element.

It's possible to pass a different target to the sub-process. After you placed a sub-process element on the flowchart, click it to edit, then specify a target. It allows to easily access fields of created records or records related to the target record. E.g. to send notification to the assigned user of the opportunity that was created within the process. 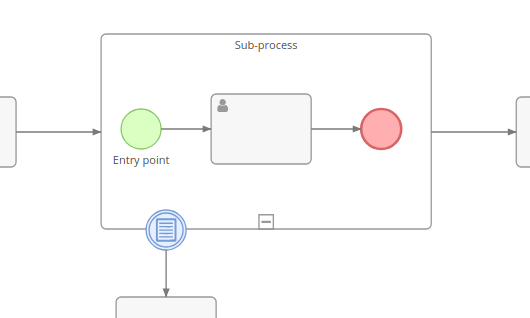 The Collection Expression should evaluate to a list of values. Each value will instantiate a separate sub-process. The value will be available in the variable $inputItem.

In the case of the sequential multi-instance sub-process, sub processes will be executed one by one. Otherwise they execute in parallel.

The result of a multi-instance sub-process can be returned to a specific variable defined by the Return Collection Variable field. It will contain an array of objects. Each object will contain return-variables of each sub-process instance.

When a multi-instance sub-process is interrupted by a boundary event, all other instances are cancelled.

The max number of sub-process instances is defined by the config parameter bpmnSubProcessInstanceMaxCount. The default value is 20.

Event Sub-Process has neither ingoing, nor outgoing flows. It is triggered by its Start Event. The start event can be of any type: Conditional, Timer, Signal, Message, Error, Escalation.

When an event sub-process is initiated, all formula variables are copied from the parent process to the sub-process. 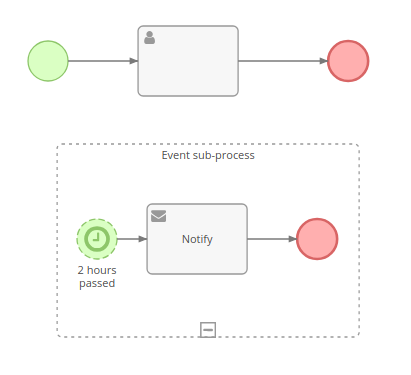 Executes a sub-process defined by a flowchart stored separately. Provides the ability to re-use the same flowchart in different processes. Call Activity sub-process works the same way as a regular sub-process.

It possible to pass a different target to the sub-process.