Provides the ability to import records from CSV files.

Select what type of records you need to import (Entity Type field). Select a CSV file. A file should be formatted in UTF-8. Select What to do?. Available options: 'Create Only', 'Create & Update', 'Update Only'.

Once you select a CSV file, you will be able to see how it will be parsed in the Preview panel. When you change parameters, the preview will be updated. 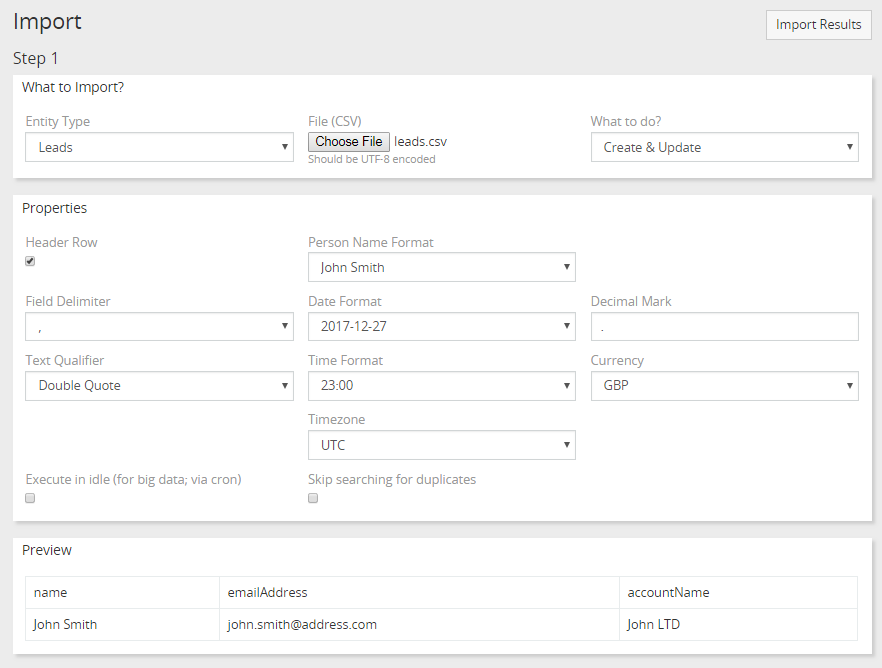 Setup the field mapping: how fields correspond to columns of the CSV file. You can skip not needed columns here.

In cases of 'Create & Update' and 'Update only', you need to check fields by which records that should be updated will be found. For example, if you check update by 'Name' field, then records with the matching name will be updated.

Add default values you want new and updated records to set with. For example, you can specify 'Assigned User' and 'Teams' that will be applied by default.

After the import is done, you will be able to revert created records. You will be able to see which records were recognized as duplicate and which were updated. Duplicate means that there was a similar record in the system. You can remove all imported duplicates at once.

Click Run Import button to proceed. It may take some time before the import process gets finished. If you want to import a large bunch of records, it's recommended to run import in idle. 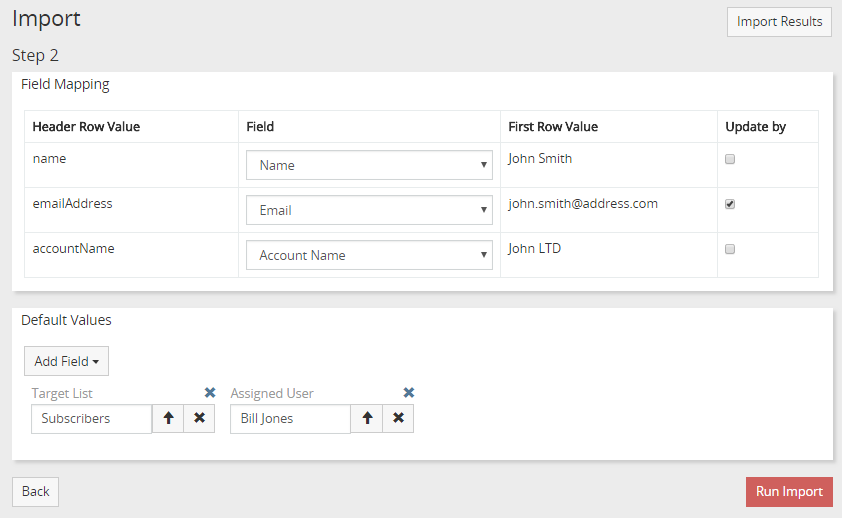 Once the records are imported and you are sure that imported data is fine, you can Remove Import Log (by clicking the button on the import results view) to preclude accidental reverting of the import.

This will permanently remove all imported records that were recognized as duplicates.

This will create a new import with the same parameters and field mapping.

When you import Contacts, Leads or Accounts, you can add them to some target list. On the Step 2, you need to add Target List field on Default Values panel and select a needed target list record. You can also use 'Update only' or 'Create & Update' import type to link existing records with a target list.

The import must be created via UI (with Run Manually checked) before.

--params-id is ID of a previously run import. Its parameters will be used for the import.

All rows that failed to import will be available in the Errors panel on the Import result view. It's possible to view the reason of the failure (in most cases it's a validation), the index of the failed row and values. To view error details, click the View action from the dropdown.

There's the ability to export all failed rows back to CSV (in order to fix them and then re-import).

Occurs when importing an ID that already exists. Most likely, you didn't reverted the previously imported records and try to import them again.

Validation is applied for imported records. If a row does not pass validation, the record won't be created.

When importing to an enum field, values in a CSV should be the same as values (options) defined for the field in Espo. If your data source use different values, consider replacing them in the CSV before importing. One can utilize the VLOOKUP function in the spreadsheet app, or use simple Find & Replace.

If you import an empty value, but your enum field does not have an empty option, validation will fail.